No foreign DNA, no risk

Molecular diagnostics must only test one person: the patient himself. At Rychiger, we make sure that foreign DNA stays outside!

Based on a true story: a large American manufacturer of molecular diagnostic sample-in / result-out tests encountered a problem in his manufacturing: Where do the many false positives from manual production come from?

Not all tests show this error, and they do not originate from single batches. There is no obvious pattern. False positives appear randomly. So, what went wrong?

The investigation or Root Cause Analysis begins. As usual, batch reports are used to find the first clue. Close-meshed tracing is applied. The operators are asked whether they have noticed anything. Every operator had to fill out a detailed questionnaire about their life outside of work. The detective work pays off and finally sheds a weak light into the abyss: the false positive tests seem to have been manufactured by smokers. Data suggests, that it is not just one smoker compromising the results. Equally not all smokers seem to be problematic for manual manufacturing of molecular diagnostic products.

So, what was it exactly that showed all those false positives?

Cigarettes from a particular manufacturer seem to be responsible. Or rather: the tobacco was, and to be more precise, the fertilizer of the tobacco plant in the field. The fertilizer is obtained from cattle manure (cow fertilizer). Cattle have bacteria in their digestive tract that can be pathogenic in humans. This is what the molecular diagnostic PCR tests looked for. And found! After the tobacco plant was dried, shredded, smoked and the smoke got into the operator's lungs, tiny amounts of the foreign DNA settled through the operator's breath onto the PCR tests. And thus, falsified the test results. A strange tale you might suppose, but true! Random false positives were the result. Every manufacturer's nightmare!

Something similar happened with another PCR test manufacturer. But the cause could not be traced. The consequence? The construction of a completely new building, new machines, and processes. Market shares were lost, a huge hole in the company's coffers was created, not to mention the enormous loss of image. This can have dramatic consequences for a company aiming for the stars and the shareholders!

No manual work? No contamination!

The most common source of false positives in in-vitro diagnostics is contamination. The PCR test is particularly susceptible. This is due to the very high sensitivity via amplification and subsequent detection of the PCR products. The polymerase chain reaction (PCR) process aims to multiply thousandfold the smallest traces of DNA / RNA. This is how even traces or low copy numbers of RNA/ DNA can be detected. However, this method not only generates copies of genetic material naturally contained in the sample but also potentially of foreign DNA or RNA.

The natural consequence? Avoid operators getting their hands as well as breath on the products during the manufacturing process. While in production, it makes sense therefore to remove operators and rely more on automation in those areas, where the risk of contamination is highest. In this way, contact between the product and the operator can be effectively avoided - and ideally, prevented entirely.

Today, a large part of point-of-care diagnostics still comes from smaller-scale series production, with largely manual or semi-manual process steps. POC products usually have a proprietary design. The automated production of such products is not easy, especially if you consider the high demands of molecular or immunodiagnostics devices. In addition to that, manufacturing costs must be considered too. And this does not only translate merely into monetary terms but also in more profound ones, such as operator ergonomics.

Industrial scaling is already widespread for simple CE-IVD tests. Lateral flow Ag or Ab tests cost a few dollars each in manufacturing and millions of them are produced worldwide. A supply chain has been established that can map this specific form factor or design. Dedicated solutions are being developed. Economies of scale apply. An industry standard arises, with all its pros (and possible cons).

The situation is different with the newer sample-in/result-out PoC tests, in which the usual test process steps (i.e. purification, amplification, detection) are combined in one cartridge or cassette. These tests/devices can be complex. They not only contain all the necessary reagents themselves but also the intelligence to timely sequence the molecular processes to perform the required test correctly. The advantages? Prompt, accurate, and precise diagnosis.

This has important consequences in the production of these PoC tests. First and foremost, it is patient safety. In the case of IVD, this consists of ensuring the diagnosis with the highest possible sensitivity and precision. A wrong diagnosis can have minor consequences and inconvenience, such as an unnecessary quarantine. Or have more serious consequences, such as unnecessary treatment, or even a harmful one.

At Rychiger, we go above and beyond to understand the needs of producing CE-compliant IVD tests. We have gathered a huge array of know-how in the implementation of PoC projects. This makes our systems unique: we equip them with the label “wipe-cleanable” or even “DNA-cleanable” executions.

In developing both, we took a holistic approach. Every step in the development process, sourcing process, assembly process, transport and, above all, later in the usage phase of the system was considered and risk assessed, from a patient safety perspective and reverse engineered with the focus on raising patient safety to a new level. This resulted in a design philosophy that was specifically optimized for the requirements in ​​manufacturing CE-compliant IVD devices.

During assembly, it is particularly important that the painstakingly treated surfaces of the system in the product area are not accidentally damaged. A difficult undertaking when entire, pre-assembled process modules are lifted into the machine with the crane!

The usage phase is probably the most critical phase in terms of the contamination risk of the tests. The operator, as mentioned above, is the major risk factor here. A high degree of automation, but above all trouble-free operation of the machine, are the key success factors. RTS (Rapid Transfer System) for consumables, FFU (HEPA Filter Fan Unit), and the strict segregation of white and black areas round off the design philosophy.

Often the various manufacturing steps of a PoC device are accomplished by several discrete machines or island automation. For example, machine no. 1 takes care of partially assembling and filling reagents into the product. Then, a lyophilization step occurs on machine no. 2. Finally, machine no. 3 serves to seal and assemble the product. Even if each individual piece of equipment is inherently clean, the risk of contamination moving the products from one machine to the other remains. We have solutions for this, too. Ask us. We would be glad to help you!

Remove impurities without leaving any residue

During the polymerase chain reaction, thousands of copies are made of all DNA / RNA strands that were contained in the sample or are incorrectly found in the test kit. Whether dead or alive, does not matter. This has a major impact on our machines. Foreign DNA / RNA that is in the system before the start of production must either be destroyed or, even better, removed without leaving any residue. The surfaces in the product area are therefore such that they offer as little attack surface as possible for exogenous DNA / RNA and can be cleaned with DNase, RNase, isopropanol, or even bleach.

All surfaces in the product room have been specially treated so that DNA and RNA cannot stick to them. Corners and edges are rounded off. Spacing and ergonomic design between the individual modules ensures that everything can be wiped easily. Despite gloves and PPE. And that applies not only to the parts that we manufacture ourselves in-house but also to components from third-party manufacturers that we integrate into our machines. We work closely with OEM manufacturers in search of the same design philosophy.

This goes so far that our suppliers have dedicated “wipe-clean” and “DNA-clean” versions or even a series of their products. An effort that pays off: our machines are so easy to clean and keep clean that the necessary SOPs have only a minor influence on the OEE of our machines.

So, particular attention is paid to the accessibility of the product area to a machine that Rychiger calls “wipe-clean” or “DNA-clean”. Extra-wide doors, no structural posts obstructing the view, access to the machine from both sides, and lighting in the machine make it easier for the operator to carry out his task successfully. 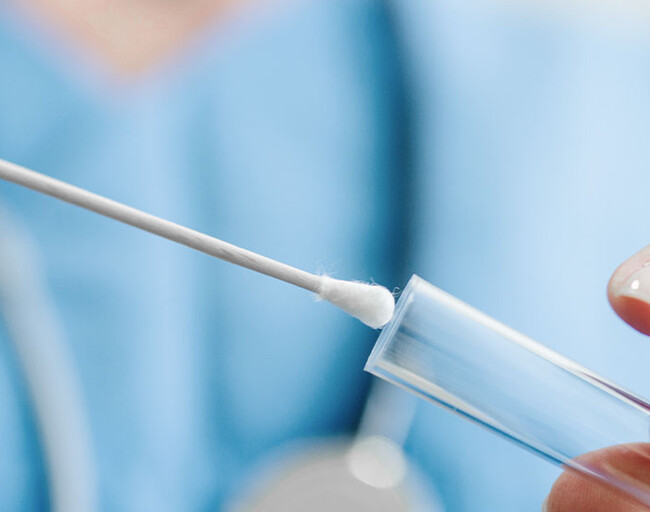 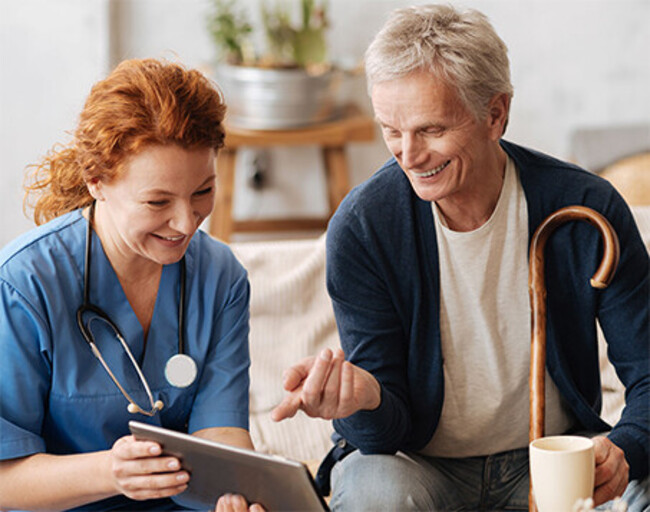 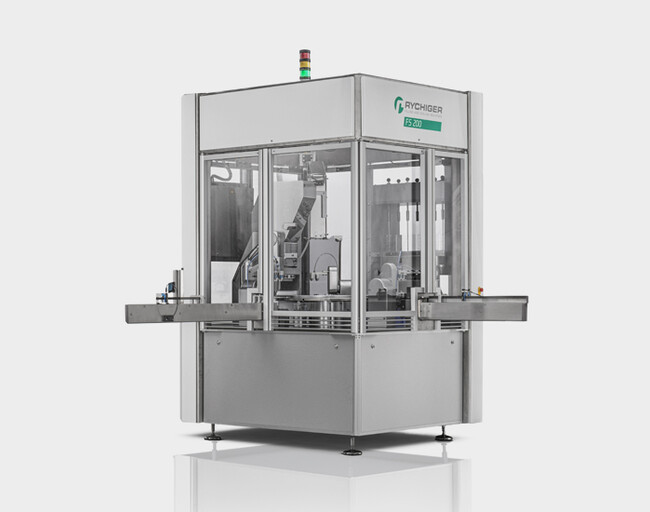